Continuing with the self-made RF test equipment theme I decided to next make an RF power meter. Accuracy of the finished power detector should be good enough for calibrating the output power of my VNA and measuring the output power of my radars. I'll be happy with +- 1 dB accuracy and sometimes even a worse accuracy is useful in measuring if there is any signal at all. USB connection is nice to have so that I can connect the meter to computer and for example automatically measure power of the VNA over the whole frequency range without having to manually write down all the measurement results. 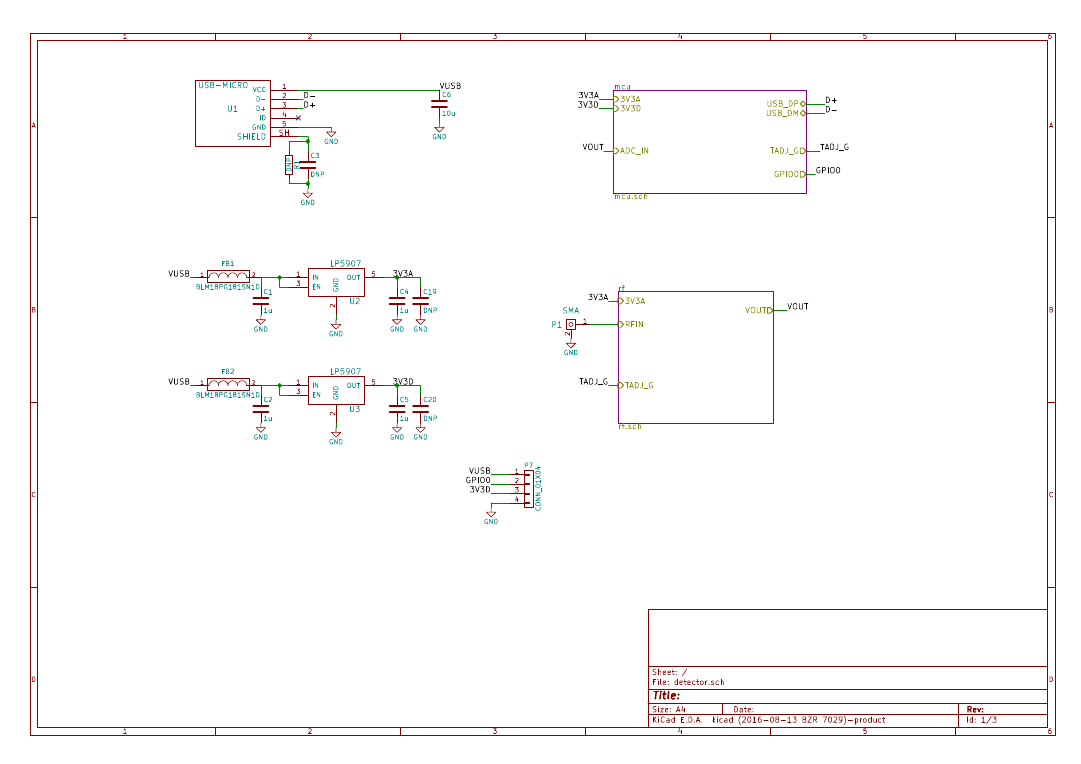 Power detector could be done simply with a diode followed by capacitor similar to peak detector circuit used at lower frequencies. Diode will rectify the RF signal and generates a DC voltage which is proportional to the RF power.

While it would be possible to design the detector using a discrete diode and matching circuit, it is much cheaper, easier and accurate to use integrated circuit already containing the necessary circuit, matching circuit and temperature compensation. Existing ICs are also very well characterized so hopefully I don't need to calibrate the power sensor myself.

Searching on Digikey brings up several power detector ICs with most suitable looking to be AD8319. It works from 1 MHz to 10 GHz, has good accuracy, dynamic range and temperature stability. Package is 8-pin SMD package that can fit on a 2 layer PCB. Using 2 layer PCB instead of 4 would halve the price of the PCB.

I chose to use LPC11U68 microcontroller to interface to the computer. It is very cheap, has USB, doesn't need external programmer and I'm already familiar with some of the other LPC family processors so the programming should be easy. It is available in 48-pin QFP package which also can be routed on 2 layer PCB.

Only a voltage regulator IC is needed to complete the design. Having had a good experience using LP5907 regulator in my VNA I decided to use the same regulator on this project. It has very good power supply rejection ratio and low noise for the price. 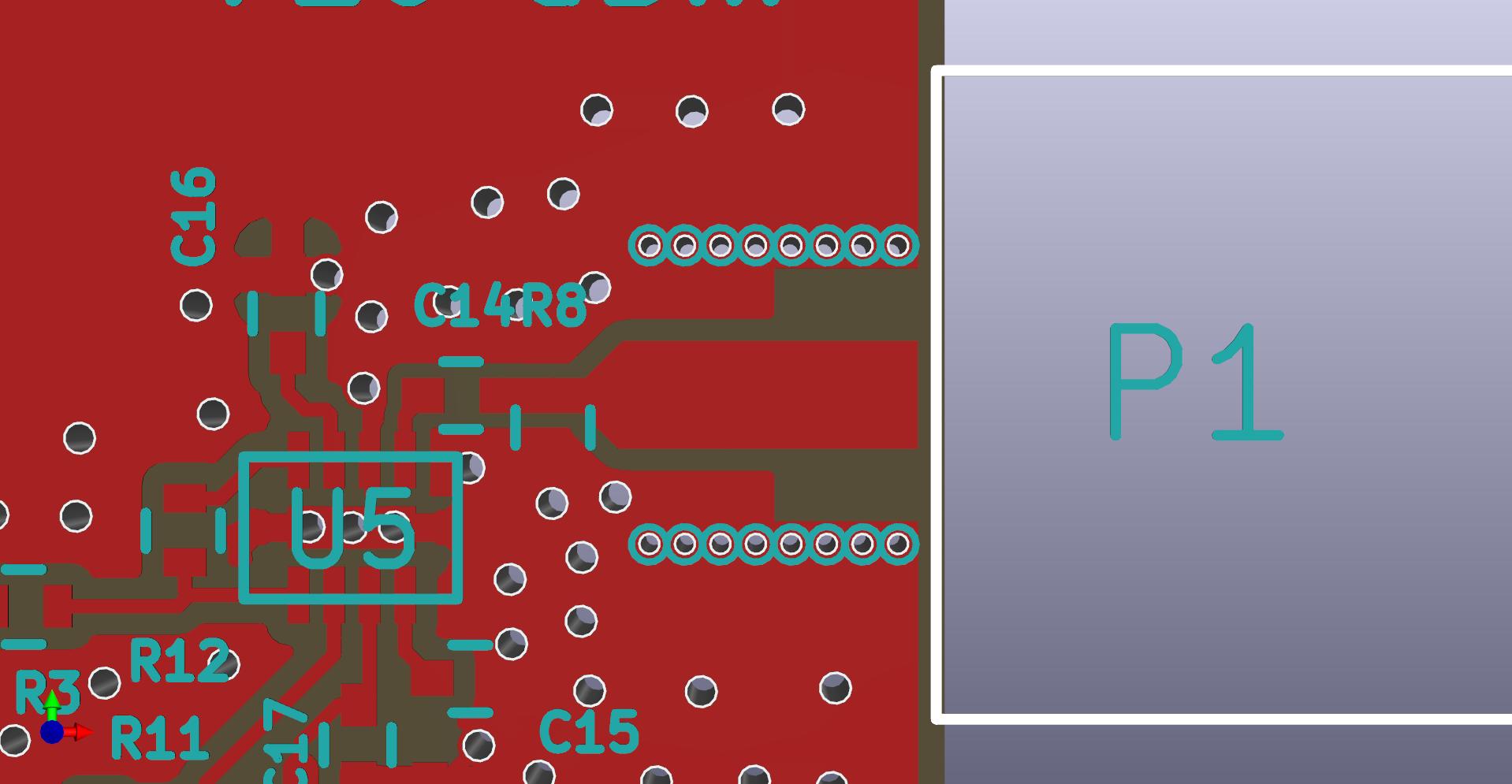 On a 4 layer board SMA connector needed a cutout under the signal pad because 50 ohm microstrip line is only 0.34 mm wide, while signal pad is 1.5 mm. Without the cutout, pad would work as very low impedance transmission line causing reflections. Cutout removes the closest ground under the pad raising its impedance. 2 layer board is so thick that the 50 ohm microstrip is about 3 mm thick and instead ground plane on the top side needs to be brought closer to the signal pad to decrease the impedance of the line. I didn't feel like I needed a stencil on this simple board, so I dispensed the solder paste manually. I did have few short circuits on the microcontroller pins that I fixed manually, but otherwise it worked fine. Soldering was done on my reflow oven made from toaster oven. 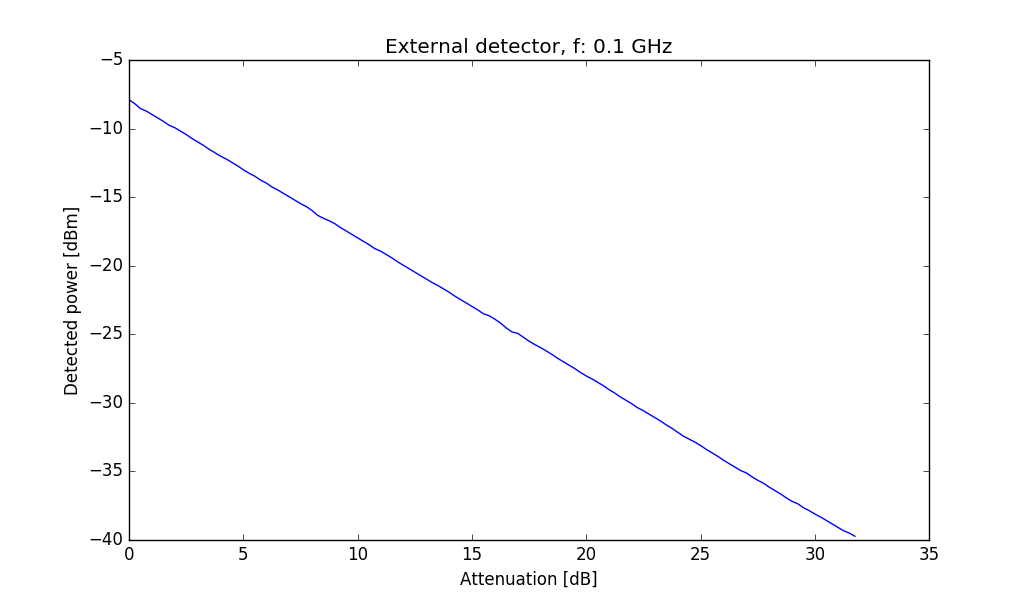 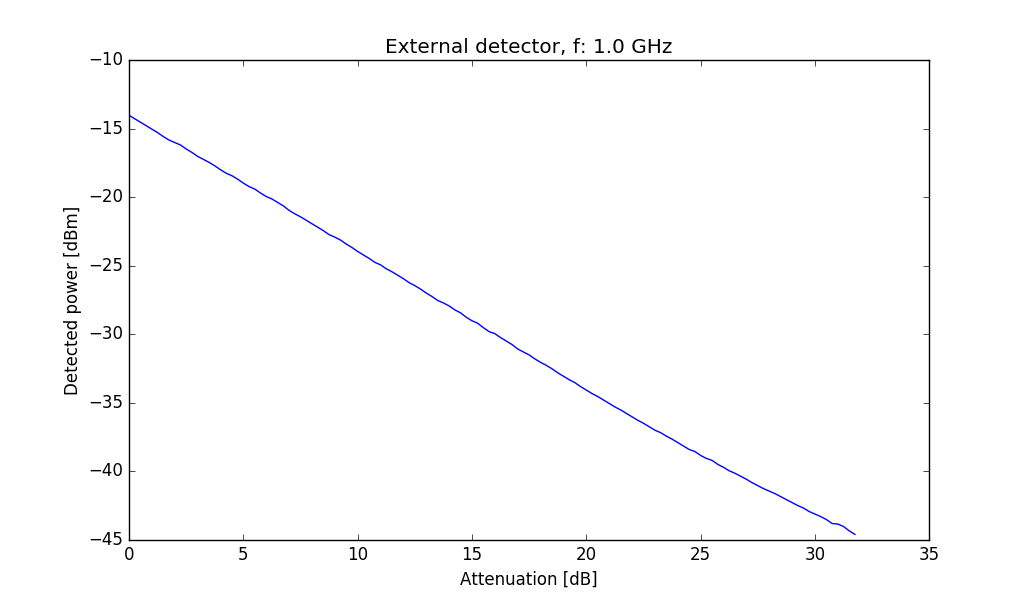 At 1 GHz power output of the VNA drops a little bit and the linearity can be seen to drop a little bit below -40 dBm. 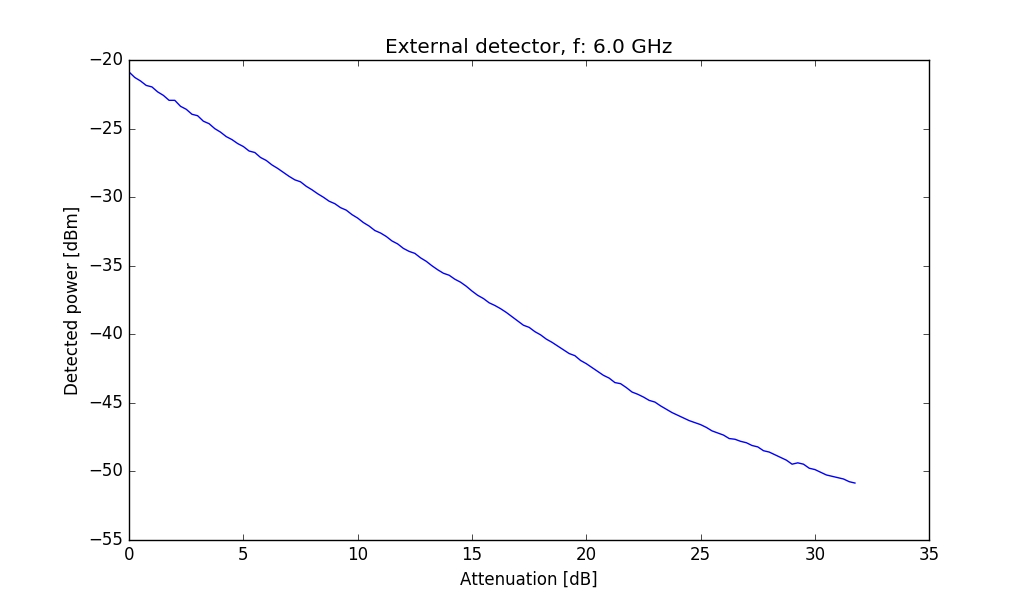 Input matching of the detector chip itself is very high impedance, so the matching suggested by the datasheet is 50 ohm resistor to ground before the detector input. I used the suggested matching on my PCB since I wanted it to have a good matching over wide bandwidth. 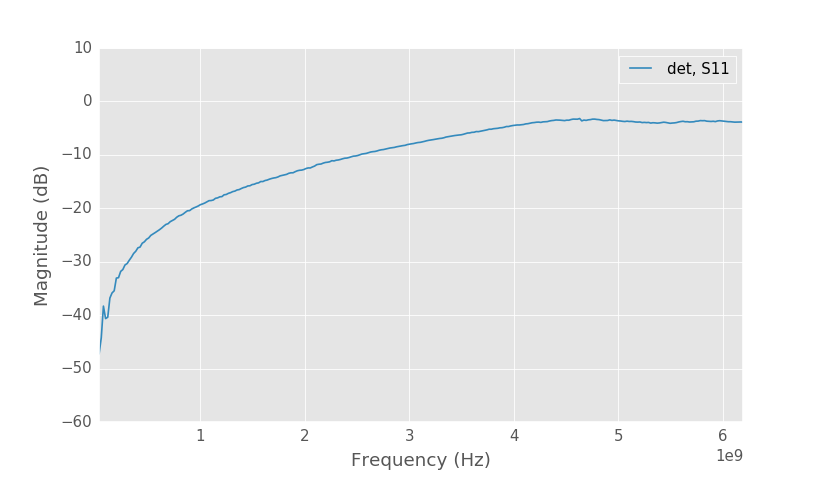 Input reflection coefficient of the power detector measured with my VNA.

While the matching at low frequencies is very good, at high frequencies it quickly becomes very poor. At 4.5 GHz matching is only -3.4 dB.

Block diagram of the input matching.

Cause of the poor matching at high frequencies is the TX line 2 before the power detector input. At low frequencies length of the transmission line is electrically short and looking from the SMA detector board looks like high impedance power detector in parallel with 50 ohm resistor, which is close to 50 ohms giving good matching. At high frequencies the transmission line isn't anymore electrically short and when it is 90 degrees long the high impedance of power detector looks like a very small resistance (Transmission line works as a quarter-wave transformer). When a short circuit is in parallel to the 50 ohm resistor, result is still a short circuit resulting in a poor matching. Simulation model and measurement of the input matching. Layout of the RF input.

Looking at the PCB layout of the power detector there are few ways to modify it to improve the matching. Especially RF grounding of the power detector isn't very good. On 2 layer board vias are 1.6 mm tall, which is a long distance at high frequencies. One way to improve the grounding would be to connect top side grounds of the input transmission line to directly to the ground pad of the component. This way ground current doesn't have to go through vias. Although even with this change matching wouldn't still be that good at high frequencies. Input DC block capacitor could also be changed to 0201 package so that 50 ohm resistor can be mounted closer to the input. 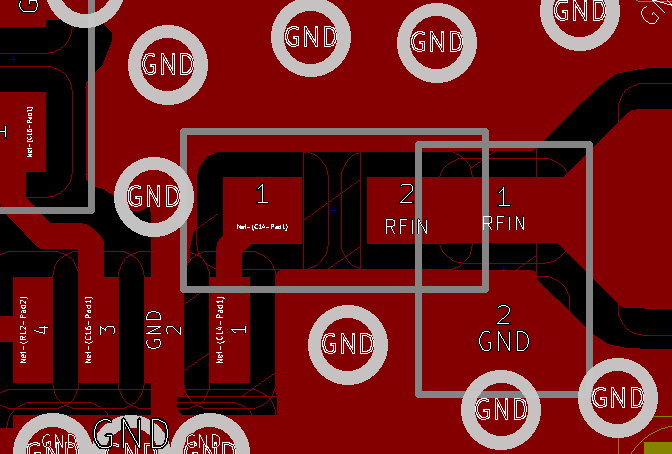 In above picture the grounding of the component is improved by connecting the top side ground to component ground pad (Both sides of the pin 1).

I don't really need a scalar network analyzer since I have a VNA that has much better accuracy. It is however a nice project and I have all the necessary parts to make it already, so why not? Above are measured results of short, open and load. Ideally open and short would be straight lines at 0 dB and load would have very low reflection coefficient. Clearly this is not the case here and especially short and open aren't straight lines, but instead have high ripple on them.

Directivity of the directional coupler is about 20 dB, which means that transmitted power going through the directional coupler measuring the reflected power will couple to the power detector with level of 20 dB less than if it would be going the right way. This means that even if the DUT absorbs the signal perfectly without reflecting anything, reflected power is measured to be 20 dB below the transmitted power due to directivity error. This is exactly what is observed when measuring the load.

Ripple in short and open measurements is also caused by directivity error of the directional couplers. Some of the transmitted power from signal source is coupled to the power detector measuring the reflected power and some of the reflected power is measured by the power detector measuring the transmitted power. If the right way coupled and wrong way coupled signals are in phase they will add up and power detector measured bigger power than without the directivity error. If the phases are opposite, signals partially cancel and measured power is lower. As the phase of the reflected signal varies as a function of frequency it causes the observed ripple pattern on the plot. 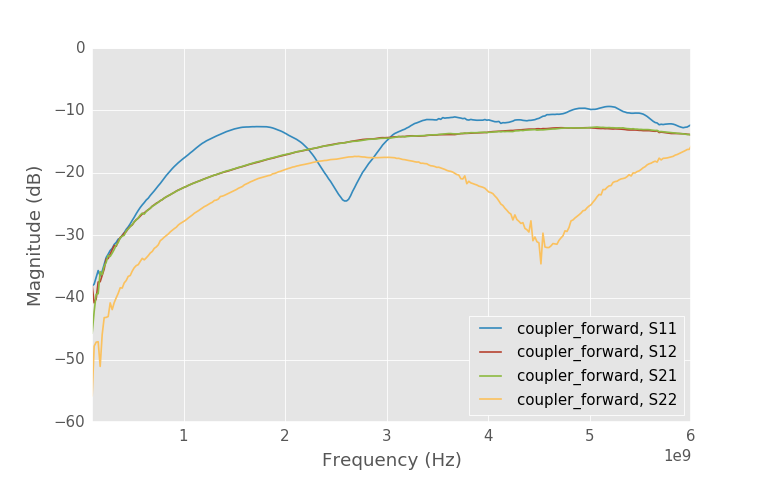 Measured S-parameters of the coupler board from input to coupling port.

At low frequencies the open and short measurements are very noisy and load seems to have very poor matching. These are caused by the too low coupled power to the power detectors. Coupler board I'm using has low coupling at low frequencies and dynamic range of the power detectors isn't good enough to measure the low power and it shows the noise floor.

Ideal open and short have reflection coefficients of 1 and -1. All of the power is reflected and phase difference between them is 180 degrees. When average of short and open measurements is taken the directivity error is cancelled. As the standards have high reflection coefficient and they don't absorb any power, their averaged measurement measures the losses in the measurement system. Subtracting the average of open and short measurements from other measurements can then be used to correct for the losses in system. It will also correct for the mismatch in sensed power of the two power detectors. Same measurement as above, but with reflection tracking corrected.

Even with the reflection tracking corrected, ripple on the traces doesn't go anywhere because directivity and matching errors remain uncorrected. Without measuring the phase of the signal they can't be corrected. Accurate measurements using scalar network analyzer require good directivity and good matching from all the components.

In order to have something to test the scalar network analyzer with I made a simple half-wave dipole antenna by soldering two wires on SMA connector. Target frequency is 2 GHz, which means that the length of the quarter-wave long wires should be about 37.5mm. Really the wires should be little shorter due to gap between the wires on connector increasing the antenna length by few mm. Thickness of the wires also causes some electric field to fringe also to the ends of the wires increasing their electrical length. It's expected that resonance frequency is little lower than 2 GHz due to these effects. Measuring the return loss with the scalar network analyzer connection described above gives the above plot of the return loss. While the quality of the measurements isn't very good it can be seen that there seems to be resonance little below 2 GHz as expected and also other resonance around 5.5 GHz. For comparison above is the same SMA dipole measured with my VNA. Even though it has similar directional coupler used with the scalar network analyzer measurements, results are much better because of vector error correction allows correcting for the matching and directivity errors.

Power detectors seem to work as designed except that input matching isn't very good at high frequencies. Absolute accuracy is questionable as I don't have a reference to compare it to.

You can find the hardware drawing, firmware and PC software on GitHub.