I have been using the OSH Park's 4 layer process a lot on my own projects. It has FR408 substrate that has better controlled permittivity and lower losses than ordinary FR-4 that other low cost PCB manufacturers use. In my opinion currently it is the best low cost process for making RF PCBs.

My previous boards have worked pretty well, but I decided to make a test board that I can use to characterize the process better. 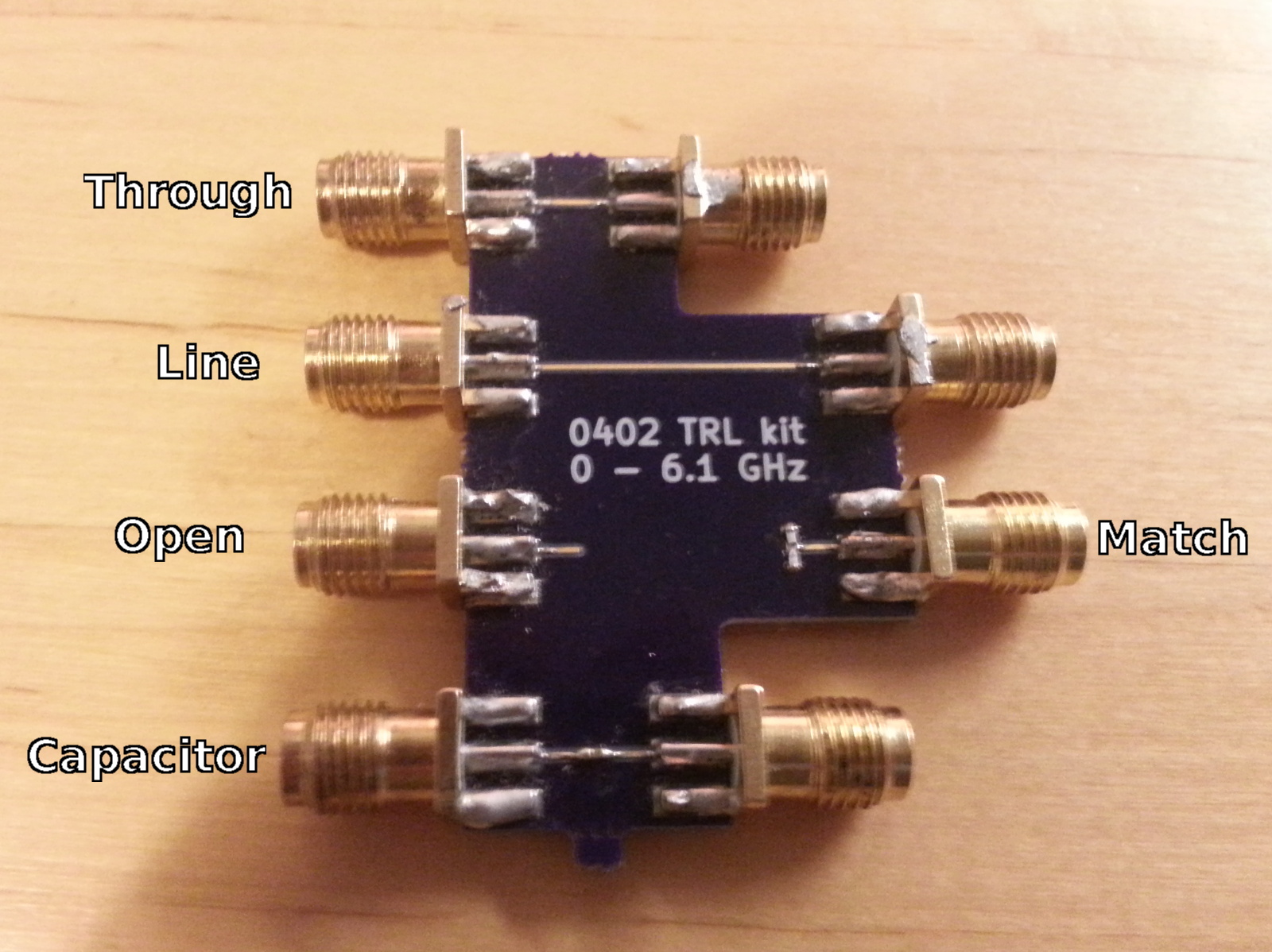 Test board for TRL calibration.

In the above picture is the test board that I made. It has two 50 ohm microstrip lines of different length, one open microstrip line, one microstrip line terminated with 50 ohm resistor and line with 0402 footprint that I populated with a 1 nF capacitor. I'm using this same type of capacitor as a general DC blocking capacitor in my VNA so I'm interested in finding out how it performs at high frequencies. 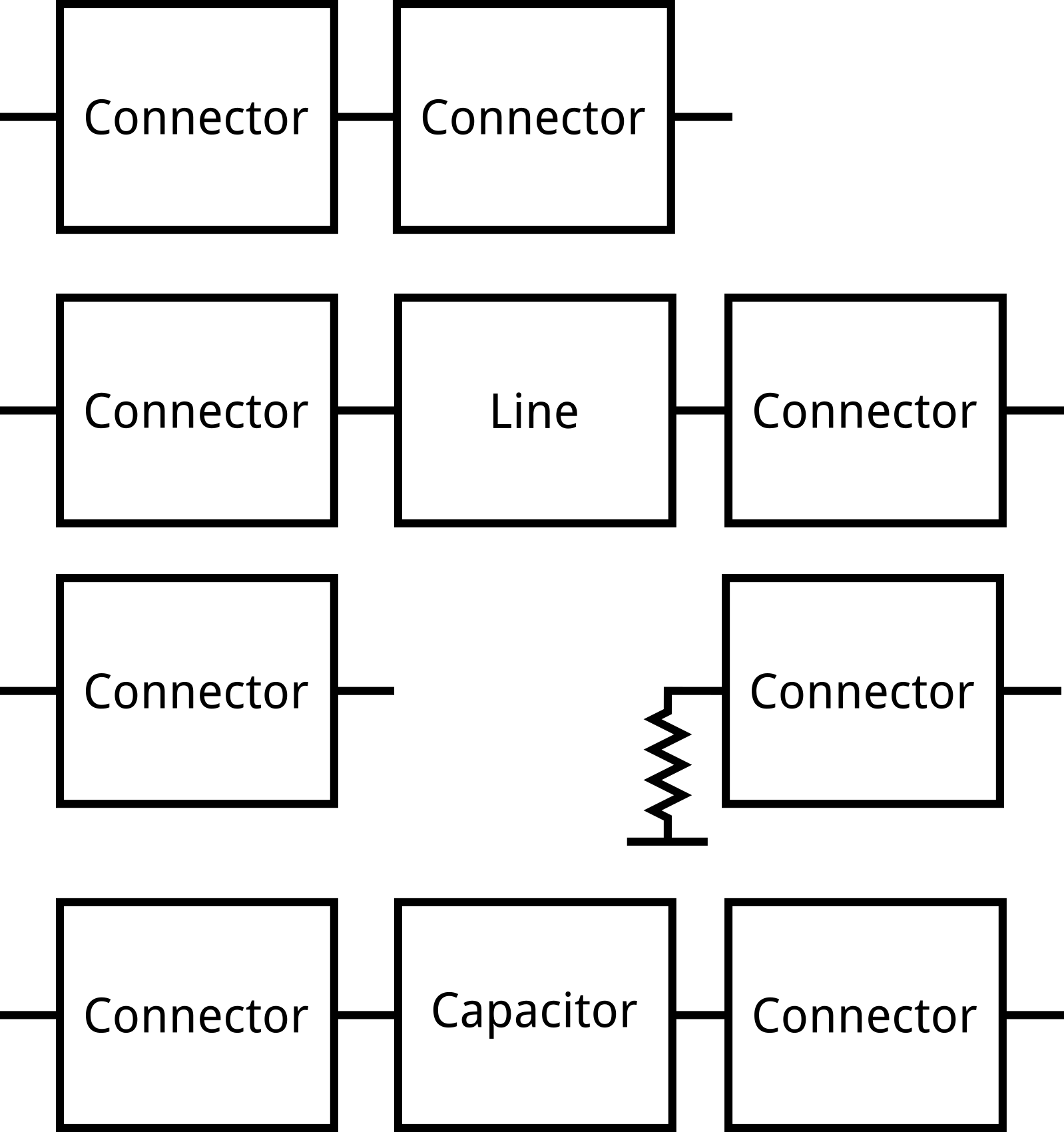 Block diagram of the board.

Using this board and TRL calibration, effect of the connectors can be calibrated out resulting in accurate measurements of the transmission line parameters. Accurate measurement of the capacitor is also obtained, which is useful in a system design. Other 0402 footprint passives can also be populated in place of capacitor to measure them at high frequencies.

There are few limitations on the TRL calibration:

Real part \(\alpha\) of the propagation constant causes loss and imaginary part \(\beta\) causes phase shift. Units of \(\alpha\) are in Nepers/meter, which can be converter to more practical units of dB/m with equation \(20\log_{10}(e)\alpha\). \(\beta\) includes the frequency dependence and looks like a very steep straight line when plotted as is. It can be normalized by dividing by \(2\pi f\), but I think that effective permittivity of the transmission line is a more useful quantity.

Effective permittivity can be calculated from the propagation constant with: 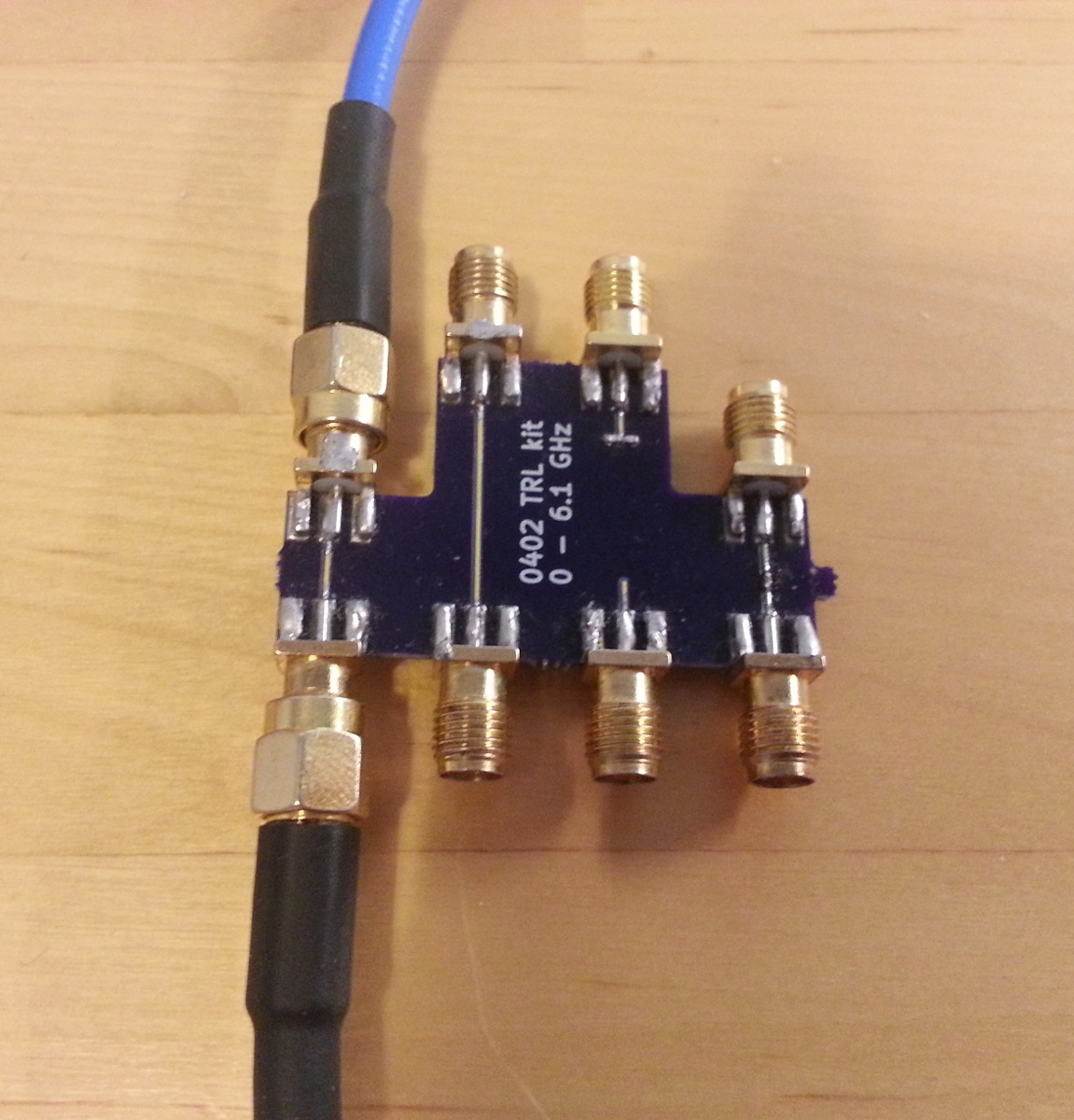 All of the following measurements are done using the second version of my homemade VNA.

I'm using scikit-rf Python library for doing the calibration. In the library there are several possible calibration methods to choose from. There is ordinary SOLT that most of the commercial VNAs have builtin, but also several more advanced calibration routines. This time I'm using UnknownThru calibration, because I know the short, open and match standards I'm using well because I have measured them with a commercial VNA, but I don't have a measurement of the through standard. Unknown thru calibration doesn't requires knowledge of the thru standard S-parameters so it is a good calibration to use in this case.

Below is the code for doing UnknownThru calibration:

The measured networks follow the std1-std2 naming rule, where std1 is the standard connected to port 1 and std2 on port 2. Measurements of open, short and load are needed on the both ports. Standards are usually measured as one port on both ports, but in this case standards are connected to both ports and they are measured as a two port. Through also needs to be measured, but with this calibration real through S-parameters don't need to be known. Through can even be a line on the board being measured or any other transmissive circuit that has S21 equal to S12.

Switch terms are needed to account for reflection coefficient of the port switch inside the VNA that causes different termination depending on the measurement direction. They are measured with the ports connected together using any transmissive standard. They can't be calculated from the S-parameters and instead raw receiver measurements are required. It's not an issue with my homemade VNA since accessing the raw receiver outputs is easy, but it can be tricky with some older VNAs. They can also be extracted from SOLT measurements if the receiver measurements are not possible. 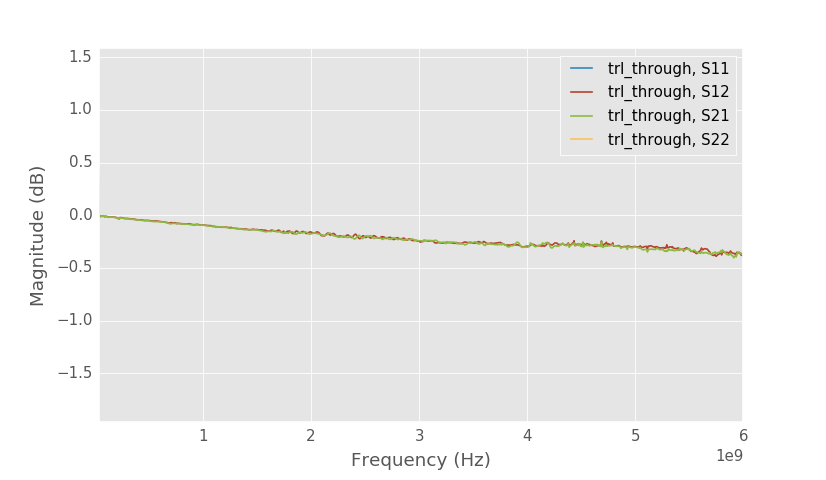 Close up to S21 of short line.

Above is the shortest 5mm long line on the board calibrated to the SMA connectors. It is matched quite well which suggest that the SMA connector matching is also good and that the line is not at least very far off from 50 ohms. Loss is smaller than 0.5 dB even at 6 GHz. 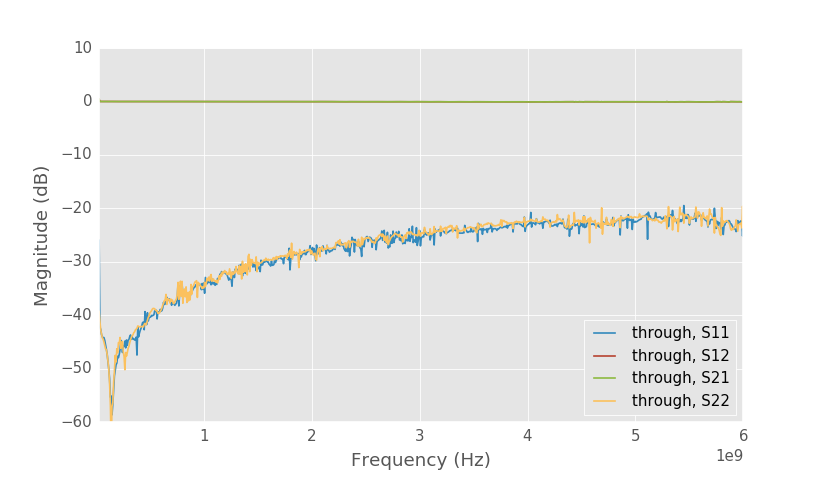 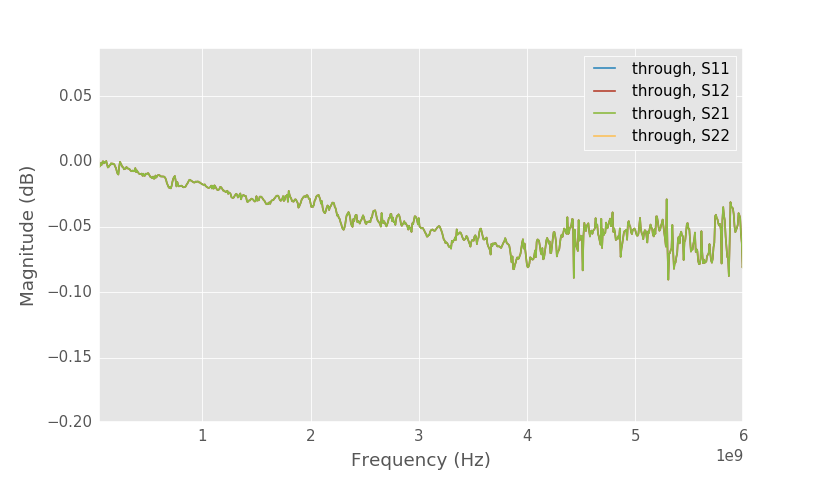 Close up to S21 of SMA through.

Above are the solved S-parameters of the SMA through (right side on this picture) that I used for the calibration. Loss is okay, but matching is not spectacular. I guess the through is not exactly 50 ohms. Same results are obtained if the line on the board is used as a through in the calibration. 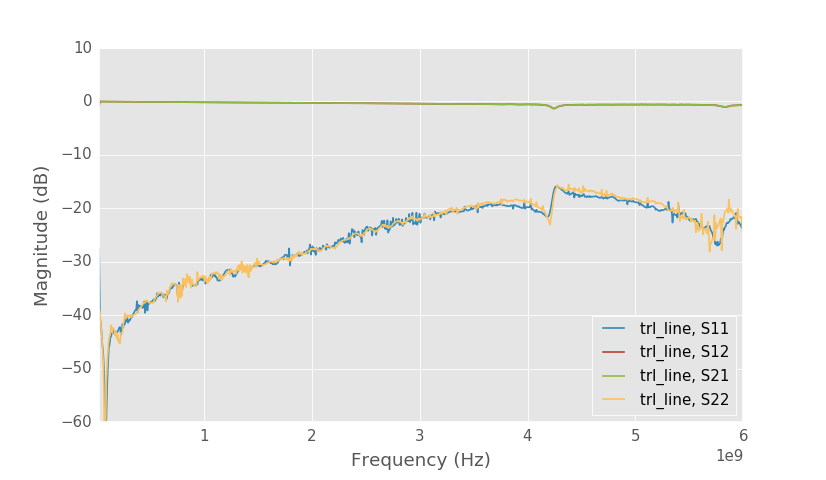 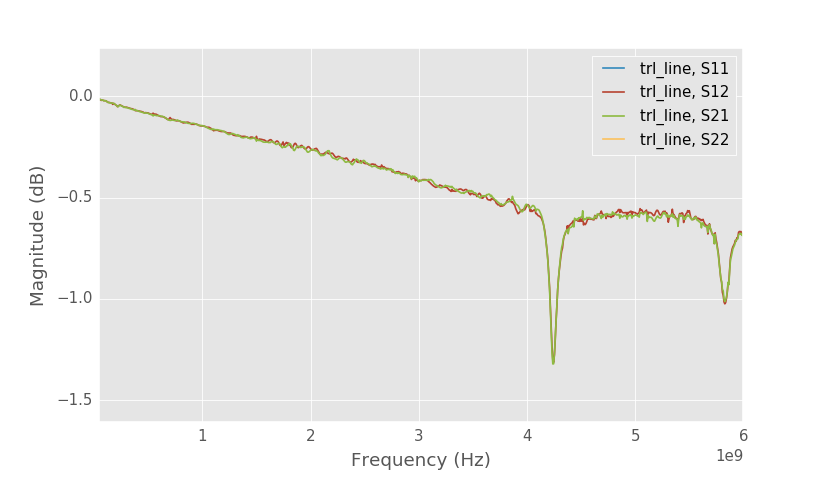 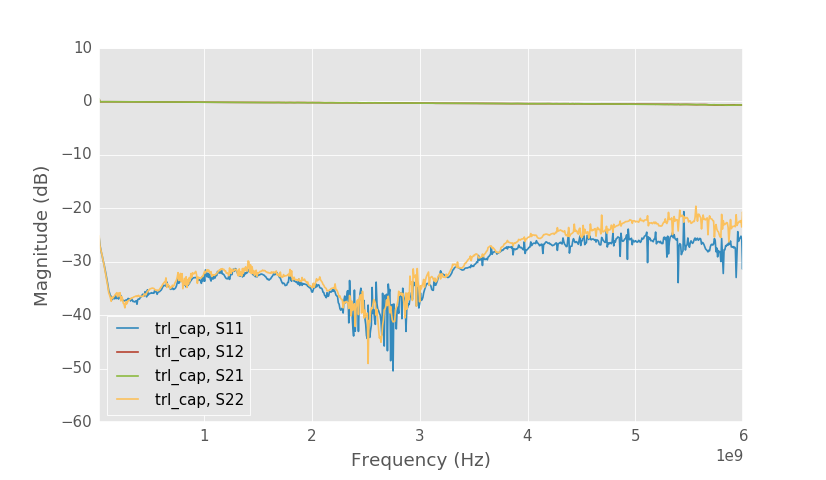 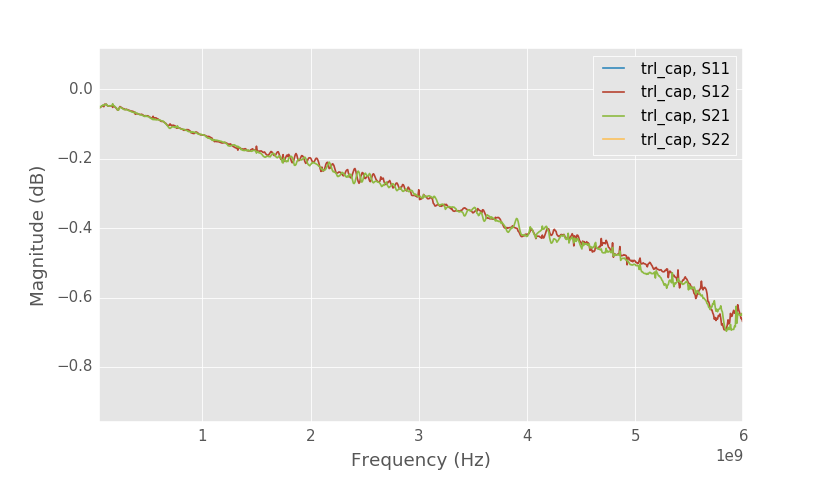 Close up to S21 of the capacitor.

MultilineTRL is just an alias of TRL, but difference between the TRL and NISTMultilineTRL calibrations is that they behave differently when using multiple lines. Ordinary least squares TRL uses the same system of equations with multiple lines as with just one, but solves it with least squares. It is simple to implement but doesn't avoid singularities if any pair of lines has phase difference that is multiple of 180 degrees. NIST multiline TRL combines the lines more intelligently avoiding the singularities as long as there is one pair of lines that has non-singular phase difference. It allows very wideband calibration even with just a few lines if their lengths are chosen correctly.

In this simple case with one through and one line there shouldn't be difference in the accuracy but I'm using NISTMultilineTRL because it has few features that the TRL class doesn't have.

Below is the code for calibrating the uncorrected measurements: 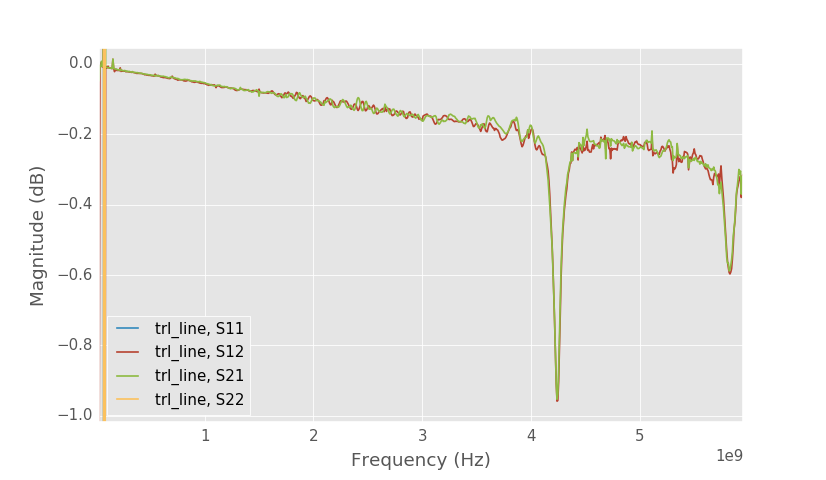 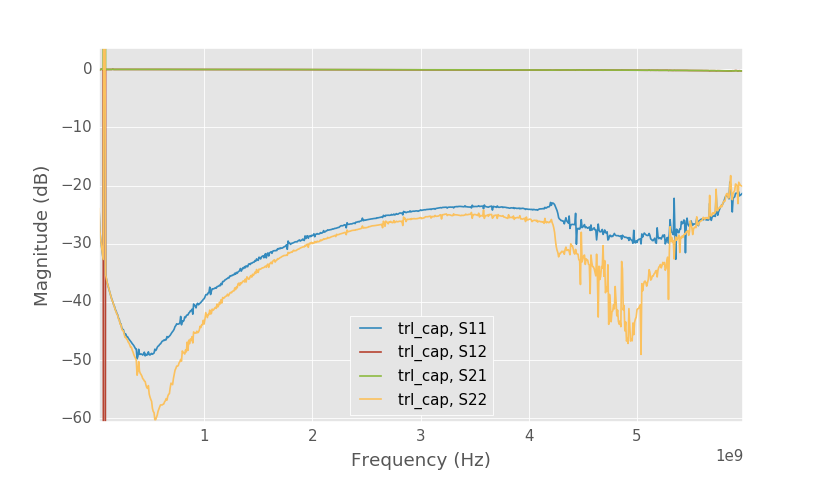 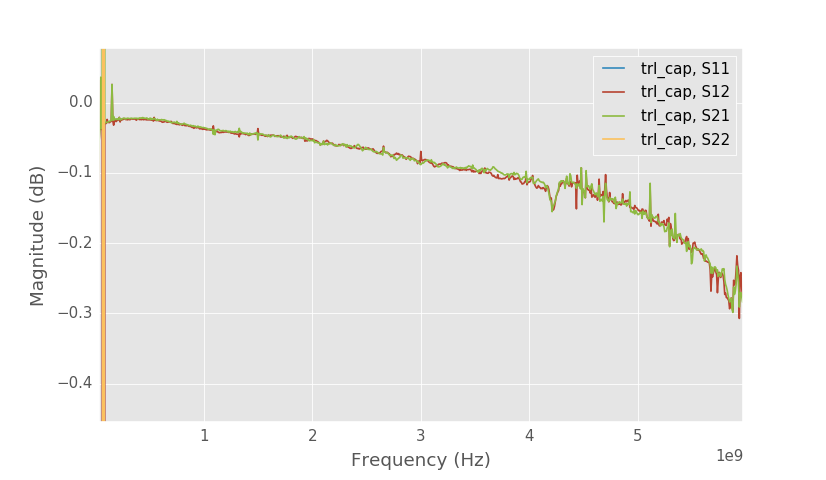 Self resonance frequency of this capacitor is 380 MHz. Equivalent series resistance (ESR) of the capacitor and pads can be determined from the loss at this frequency. Since at self resonance frequency inductive and capacitive reactances cancel out, the capacitor looks like a small valued resistor. S21 of a series resistor can be solved as: \(S_{21} = 2Z_0/(2Z_0+ R)\). S21 of the capacitor is 0.022 dB dB at 380 MHz, giving a series resistance of 0.26 Ω assuming 50 ohm reference impedance. But the reference impedance in this measurement is really the characteristic impedance of the lines. It is probably close to 50 ohms, but characteristic impedance needs to be determined more accurately if a more accurate estimate of ESR is needed.

The solved effective permittivity and line attenuation can be plotted with: 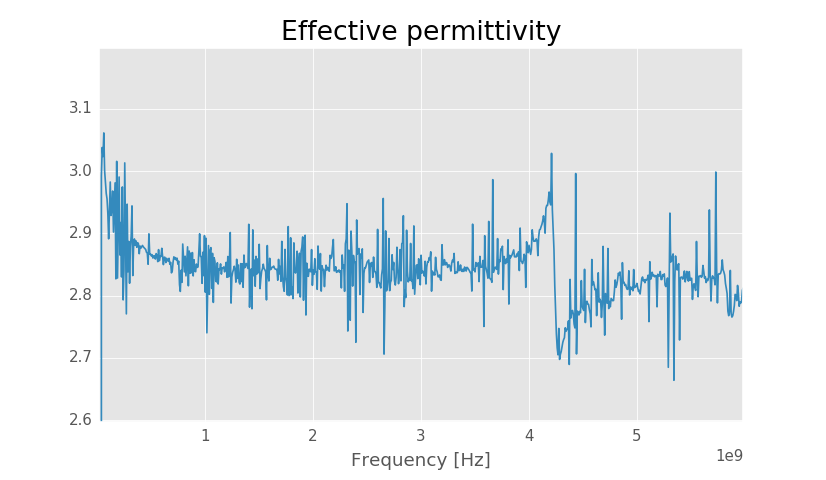 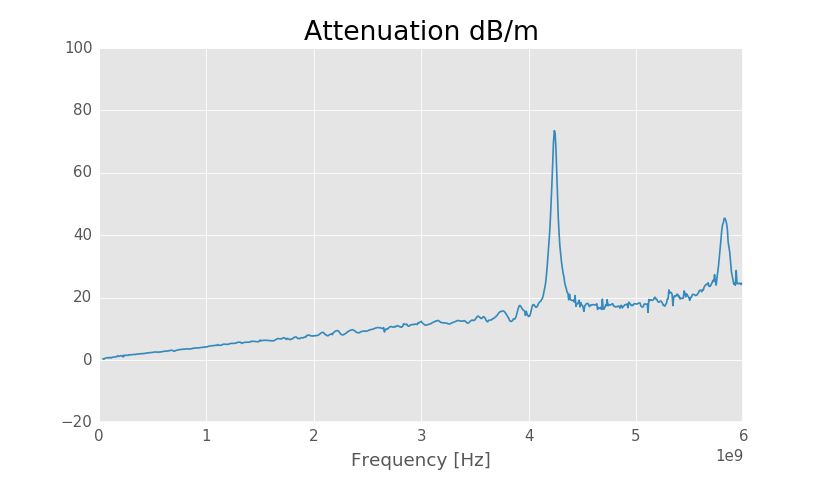 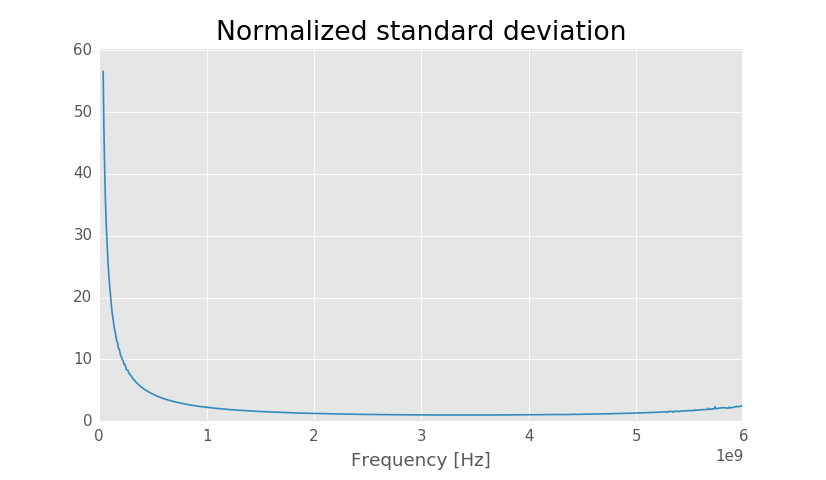 As a rule of thumb phase difference between through and line should be between 20 and 160 degrees for an accurate calibration. In the normalized standard deviation plot this corresponds to about three. From the above plot it is clear that at around below 500 MHz the accuracy is much worse than this. To improve the accuracy a longer line that is 90 degrees at low frequencies should be added.

Transmission line can be modeled using sections of lumped elements. Each section represents a short section of transmission line. One section has series resistor and inductor and parallel capacitor and conductance.

Using the lumped section model propagation constant of the transmission line can be defined as:

and characteristic impedance as:

or written using the propagation constant:

C could be measured directly, but it is hard to measure accurately since capacitance of a typical transmission line is very low. Here is a good paper of the possible methods for measuring it.

There are several ways to measure the characteristic impedance of the microstrip lines. The first most simple way would probably be trying to curve fit to the measured lines, but the problem is that we can't fit to the TRL calibrated measurements because TRL calibration's reference impedance is the characteristic impedance of the lines that we want to measure. Fitting to the measurements corrected to the SMA connectors is possible, but accuracy is limited by the matching of the connectors.

VNA calibration can't solve for both S21 and S12 of the error network and instead only the product S12*S21 is solved, which is called reflection tracking. For passive circuit S12 = S21 and we can take a square root of the reflection tracking to solve for S12 and S21. Taking square root leaves 180 degree phase ambiquity, but that is not important when only looking a the magnitudes. Directivity is S11 and source match is the S22. 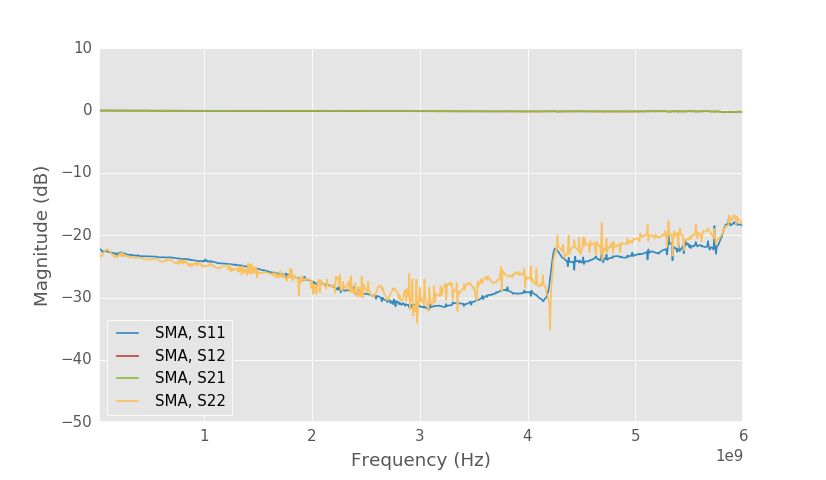 Using scikit-rf we can solve the characteristic impedance with the following code: 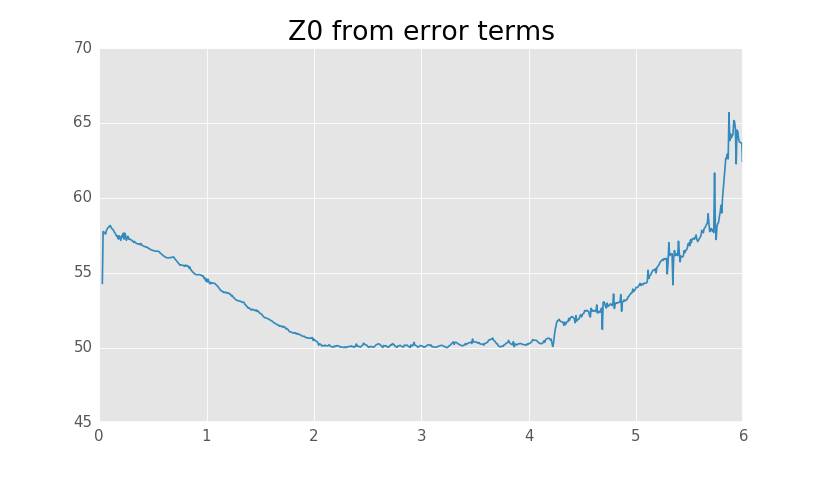 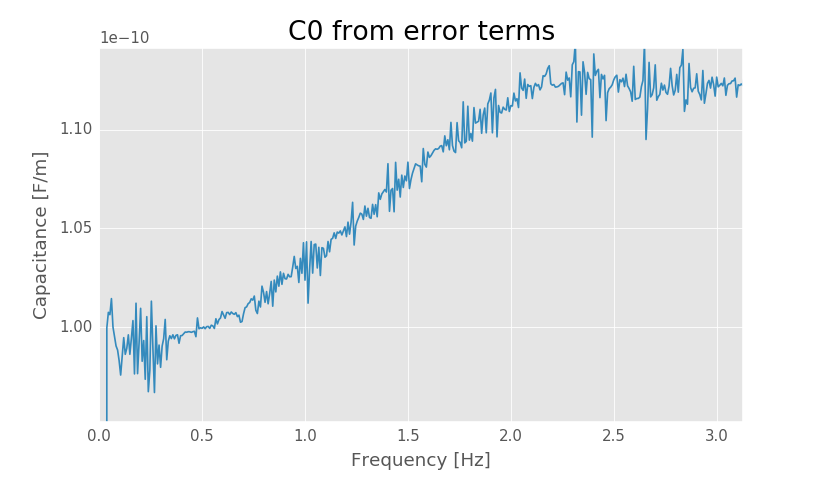 At low frequencies the capacitance per unit length is about 99 pF/m, but the obtained value is not very accurate because accuracy of the calibration is poor at low frequencies. 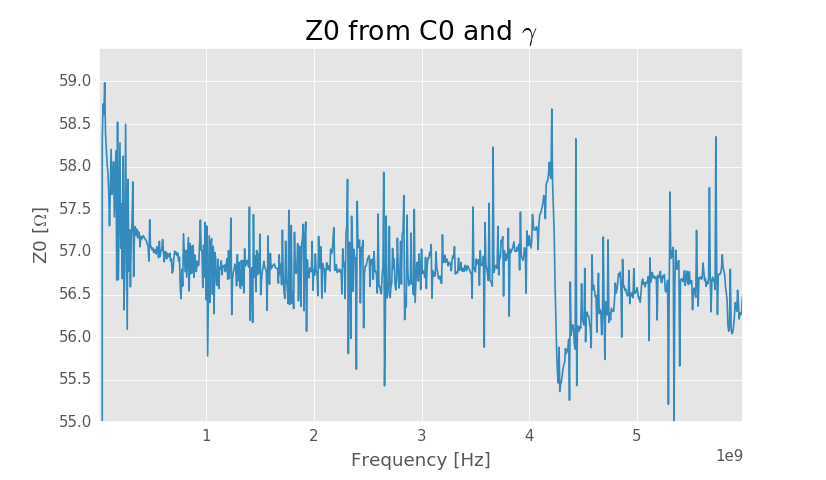 The previous method assumed that the SMA connector was well matched. A better method that doesn't assume can be used if line there is a terminated line on the board.

This equation can be solved for \(Z_0\), but it is again better to instead solve for capacitance per unit length because \(Z_0\) is not constant at low frequencies. 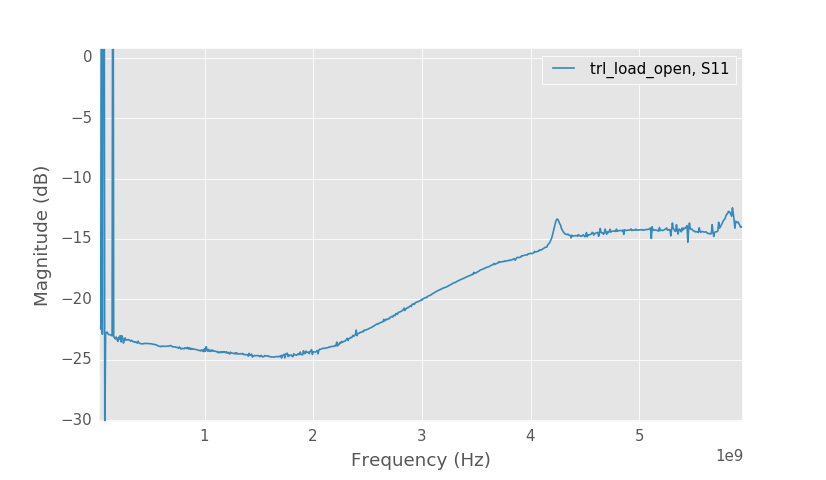 Measured S11 of the termination

Above are the TRL calibrated S-parameters of the termination. At low frequencies the S11 should be very low if \(Z_0=R_{\text{load}}\), but the measured S11 is only -22 dB. 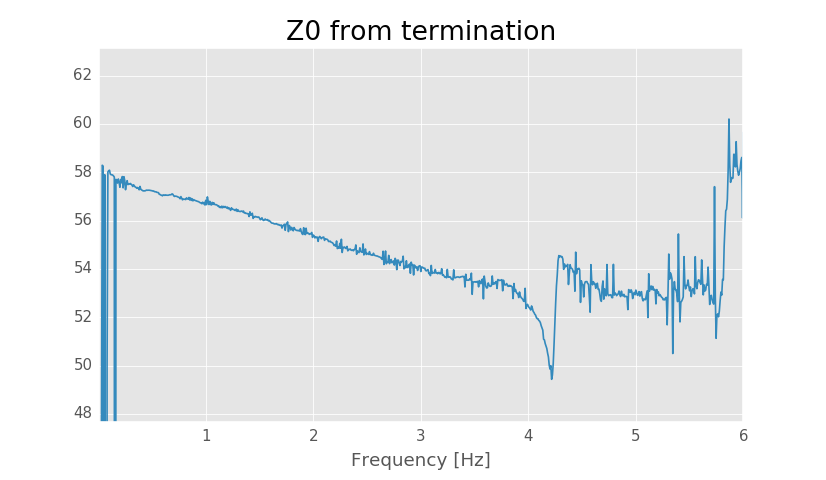 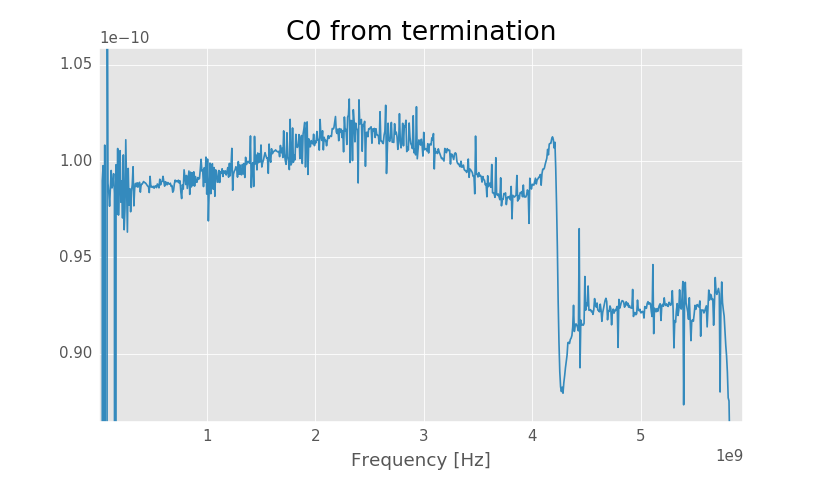 Solved Z0 seems to be around 57 Ω agreeing with the first method. Solved capacitance per unit length is about 98.8 pF/m, when previous method gave 99 pF/m. Now that we have gotten the same characteristic impedance using two methods we should be pretty confident in the result.

Finally the reference impedance of the TRL calibration be renormalized to 50 ohms by giving the capacitance per unit length to the calibration routine: 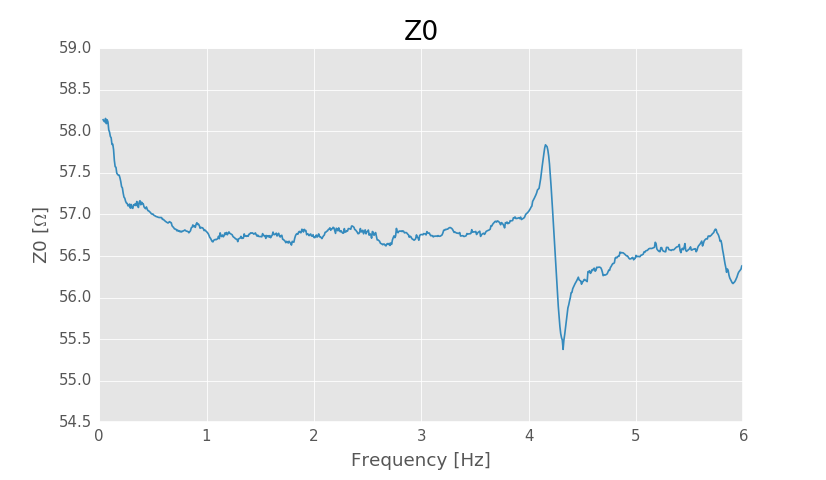 The line was supposed to be 50 ohms, but characteristic impedance seems to be over 10% bigger than that, so where's the problems? 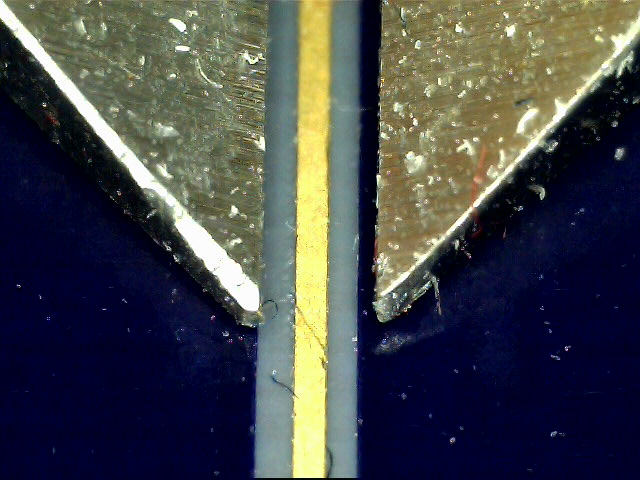 Photo of the line with calibers for scale.

The first thing to check is that the manufactured dimensions of the line match the designed dimensions. In the picture is the microstrip line with calibers set to 1.00 mm for scale. In the image distance between the caliber jaws is 118 pixels, while line is 32 pixels wide. Converting this to mm gives line width of about 0.27 mm. The designed width was 0.34 mm so the manufactured line is thinner, which raises the characteristic impedance. Inputting the measured width to microstrip characteristic impedance calculator with nominal 35 µm trace thickness, 170 µm substrate height and substrate dielectric constant of 3.66 give characteristic impedance of 57.0 ohms.

The observed increase in the characteristic impedance can be fully explained by overetching of the lines. Overetching is about 35 µm, which is not bad considering the price of the PCBs. I have seen bigger overetching on much more expensive PCBs. 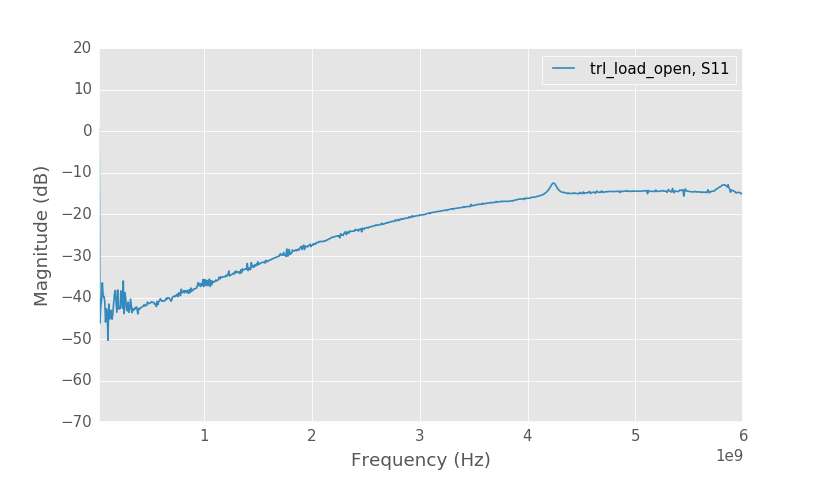 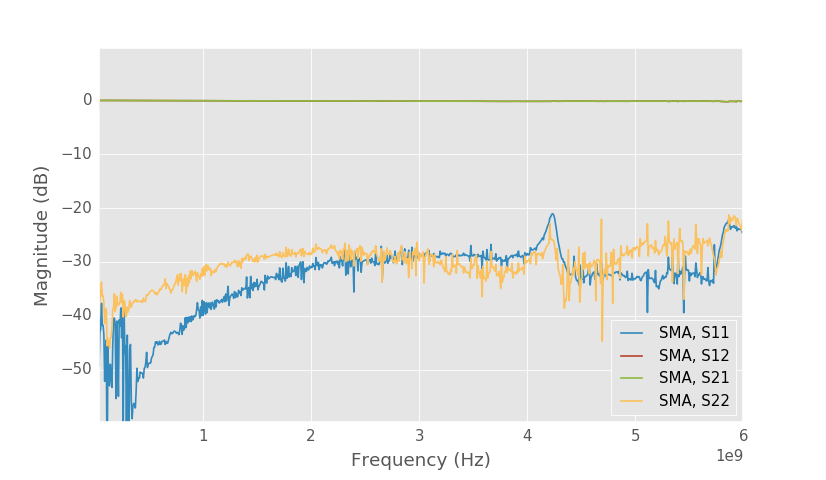 Plotting the solved SMA connector S-parameters from the error terms now gives the true 50 ohm normalized S-parameters. This time the connector matching looks much better. S11 and S22 are below -25 dB up to 4 GHz. 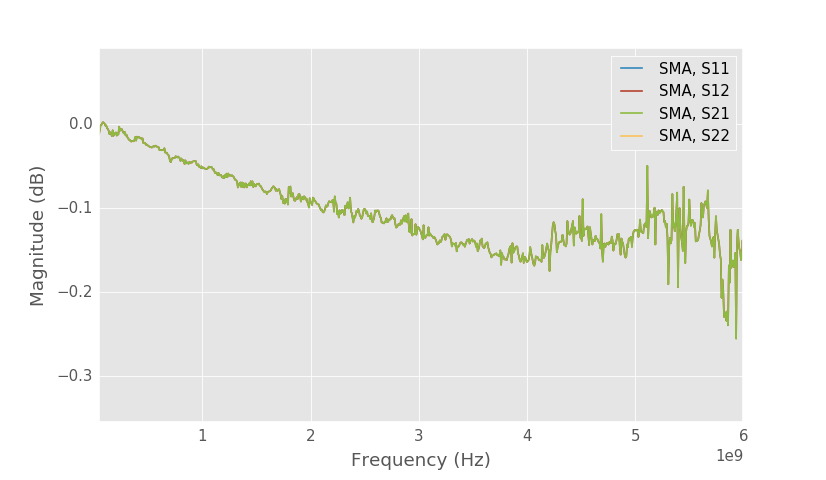 Loss of the SMA connector is also very small. 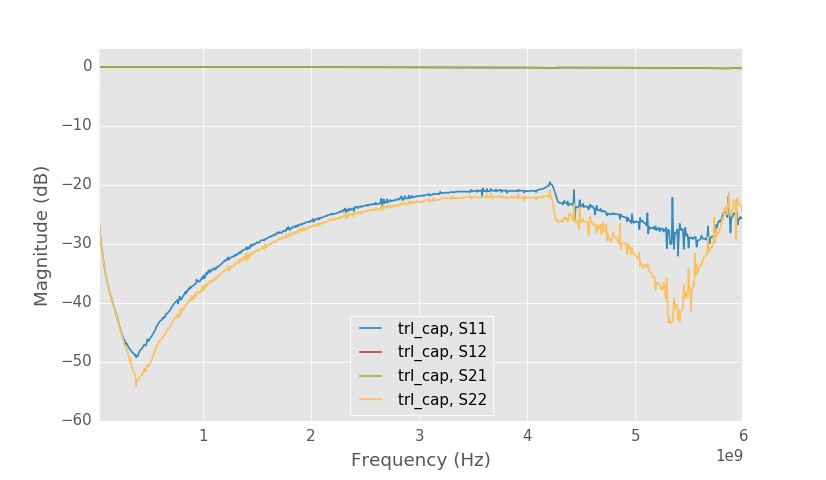 Capacitor S-parameters don't look that different from before. 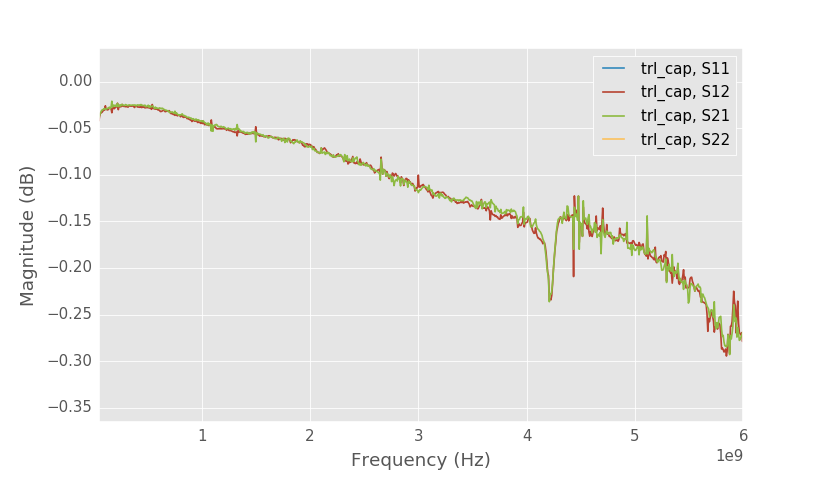 Part number of this capacitor is GRM155R71H102KA01J and Murata makes its S-parameter measurements available on their website.

My measurements include the PCB pads which cause some extra capacitance at high frequencies, but S-parameters measured by the manufacturer look very similar to what I measured. The manufacturer has measured the ESR to be 0.277 Ω which agrees really well with my measurement of 0.29 Ω.

Even though my VNA is much less accurate than commercial VNAs it is accurate enough for many useful measurements. I tried the same measurement also with the first version of the VNA and due to the much worse isolation the results were unusable.

The board had unfortunate resonance at 4.2 GHz, which I think comes from the poor grounding of the multiple ground planes. I think I'll need to order a new PCB with better grounding.